Richard Chase - The Vampire Of Sacramento - Beyond The Dark #10

https://www.youtube.com/watch?v=ePfy9RNEn6A
You are using an out of date browser. It may not display this or other websites correctly.
You should upgrade or use an alternative browser.
No comments have been found at this time 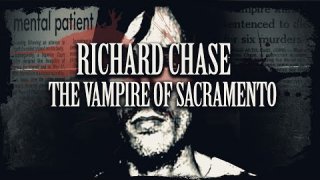 You never know what you're going to find in the desert, especially at night, beneath the shimmering stars and the glaring spotlight of the moon the countless miles of asphalt lead into the vast empty. the details of the hills and mountains are nothing but silhouettes of their former glory but these two officers are used to it, apart from the petty crime, handling affairs with the Paiute Reservation and the odd serious case coming out of Reno, they spend there days patrolling up and down the highway, watching the hours tick by.

In the cities most officers are bombarded with the domestic disturbances the keep them on their toes at all hours, but for these two men the quiet is to be feared. Driving down Route 445, the sound of radio chatter filling the patrol cars interior it appears to be another normal night, until a few miles later their headlights catch a glimpse of something stuck in a sand drift, the back end of a Ford Ranchero.

This isn't an unusual sight for the officers, with little else to do the officers pull up along side the vehicle and step out into the bitter night, the dry desert air scratching at their throats. For miles around the only sound they hear is the patrol cars engine ticking away but soon that too is swallowed by the silence, pulling out a flash light they being to approach the vehicle, it's obvious that it's in need of some care due to the red mud and general dirt coating exterior, sticking to it like hanging moss but as they get closer and peer through the drivers side window they spot two metallic tubes lying across the seat as well as a pile of men's clothes, as they circle the pickup they realise those tubes are actually a pair of rifles and the pile of clothes are stained crimson.

Bracing themselves one of the officers reaches for the door handle, The usually subtle click of the mechanism echo's throughout the night like a shotgun blast as the door swings open, with the creaking of the door hinges the state of the interior is revealed, cigarette cartons and fast food wrappers are stuffed into every nock and cranny and the smell of unwashed skin corrupts their senses, they begin their search for any clues to the whereabouts of the owner in this chaotic mess when they spot a white plastic bucket laying in the passenger side footwell, and their there's something dark inside... a liver.. in a bucket of blood. at that precise moment they hear it, a blood curdling scream, with nothing to stifle the noise in the endless expanse it echo's and chills the officers to their core, reaching for there guns the officers runs into the darkness and towards whatever hell awaits them in the black.

Not to far from the pick up they see a figure... his contours are human but he is malnourishment and the coat of blood makes him looks more fiend than man, with his arms reaching to the heavens he continues to scream bloody murder...

They don't see it, how can they not see it? The UFO is right there hovering above them, they've been hunting him for years, poisoning his blood, shrinking his heart trying to send him insane but he knows he's always been one step ahead but how can the two officers not see it? the evidence is right in front of them..unless.. they are also hunters. restraining the suspect they drag him back to the pick up where they ask him who's blood is he covered in, He bellows how all the blood is his, it's seeped out of him, how he is poisoned and dying... The two officers may not know it yet, but they are currently talking to a man by the name of Richard Trenton Chase, who would later be known as Vampire of Sacramento

Other sources include - archived newspapers, archived interviews from friends and family, police reports.